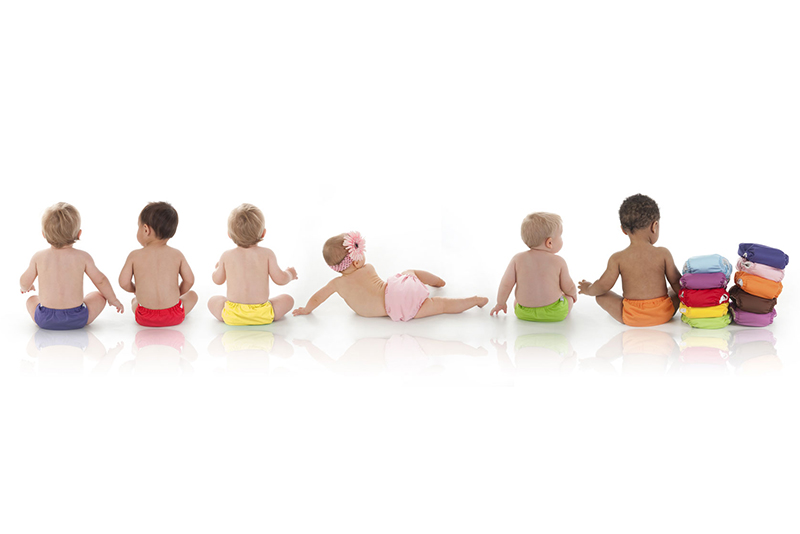 For centuries, infants were usually wrapped tightly in homemade, improvised cloths or in coverings made from plants or animal skins. Sometimes, both materials were used, as in the case of the Inuit, or Eskimos, who were stuffing layers of moss or peat inside a seal’s skin to diaper their infants as early as the 1300s. Evidence suggests, however, that sanitation was not strictly observed: during the 16th century, for example, wet garments were simply dried and reused!

The mid-19th century saw the advent of cloth diapers in today’s more recognisable form: typically squarish in shape and spun from cotton. Cloth diapers were also able to be fastened onto babies more easily, thanks to the invention of the safety pin in the late 1840s. Since then, the basic cotton diaper has hardly evolved through the decades. Today, cloth diapers are generally made from a mix of natural fibres and manmade materials including cotton, hemp, bamboo, wool, microfibre, polyester fleece and or/ polyurethane laminate (PUL). Increasingly, there is a trend towards using organic natural fibres too, for more green and sustainable production practices and less risk of skin allergies. Some cloth diapers now even have double or triple layers and a multiple, fibre-filled strip, making them much more absorbent than older styles.

It’s a wrap!
When it comes to diapering baby, is it possible to have the best of both worlds? Most parents would definitely prefer the convenience of disposables, but may perhaps be uncomfortable with their little one leaving a significant carbon footprint so early in his young life!

Environmentalists also have insisted that there is no such thing as a truly 100 percent biodegradable diaper and some supposedly biodegradable materials don’t decay completely either. Meanwhile, compostable diapers may be popular overseas but not so in a country like Singapore, where most of the population resides in high-rise apartments. Even if you do have a garden, it’s not so simple either as simply burying the diaper with soil as part of compost   mix—if not done right, there’s the risk of spreading bacteria from faeces, and even this sort of biodegradable diaper will still take a year to completely decompose (and that’s for just one, so realistically speaking, there won’t be enough area for such activity).

So what’s a savvy, tree-hugging mamma supposed to do? For starters, compromise, especially if cloth diapering all the way really isn’t your thing. And back to the question at the beginning: yes, you can have the best of both worlds, albeit with hybrid diapers, which combine both cloth and eco-friendly disposable components.

Essentially, a hybrid diaper features a diaper cover that’s reusable and waterproof, which is a big plus, as it’s usually the outside of the disposable diaper that contains the stuff that’s hardest to break down. Hybrid diapers also give you the option of either using a biodegradable disposable pad for the inside (which can be thrown away or in some cases, flushed down the loo), or natural cloth liners made of green materials like organic cotton, wood pulp, hemp or charcoal bamboo. While washing is still involved, the load won’t be as heavy, and most importantly, you’ll still be doing your bit in helping cut down on the consumer waste of disposable diapers.

If you’re seriously contemplating using hybrid diapers on your baby, you will have to decide which inner liner option you would prefer to purchase. As your baby grows you will also have to fork out for the outer cover (commonly referred to as the “shell” in hybrids) which comes in different sizes and of course, a variety of adorable designs. In Singapore, brands such as GroVia, Moo Moo Kow and RafRaf are all readily available; if not in stores then online via local delivery.

Dare we say you’re now better prepped to make a more educated decision in choosing a diapering solution for baby? Here’s hoping your baby gets nappy-happy!

Sensory Play Ideas For Babies To…

It’s never too early to start engaging baby’s senses! Even before she is born, she’s…

Baby Speech Milestones: When Should You…

Image credit: Getty Images While this serves as a general guideline for your baby’s speech…

At this stage, you may find your baby doing almost nothing apart from crying, sleeping…

When it comes to measuring developments in your baby, you need to keep in mind…

Your darling is now 3 months old! She is now a lot more responsive than…

It’s been four months since your tiny bundle of joy made your world beautiful. The…

The tiny bundle of joy now makes attempts to sit on her own, has a…
Load more (24) No more items