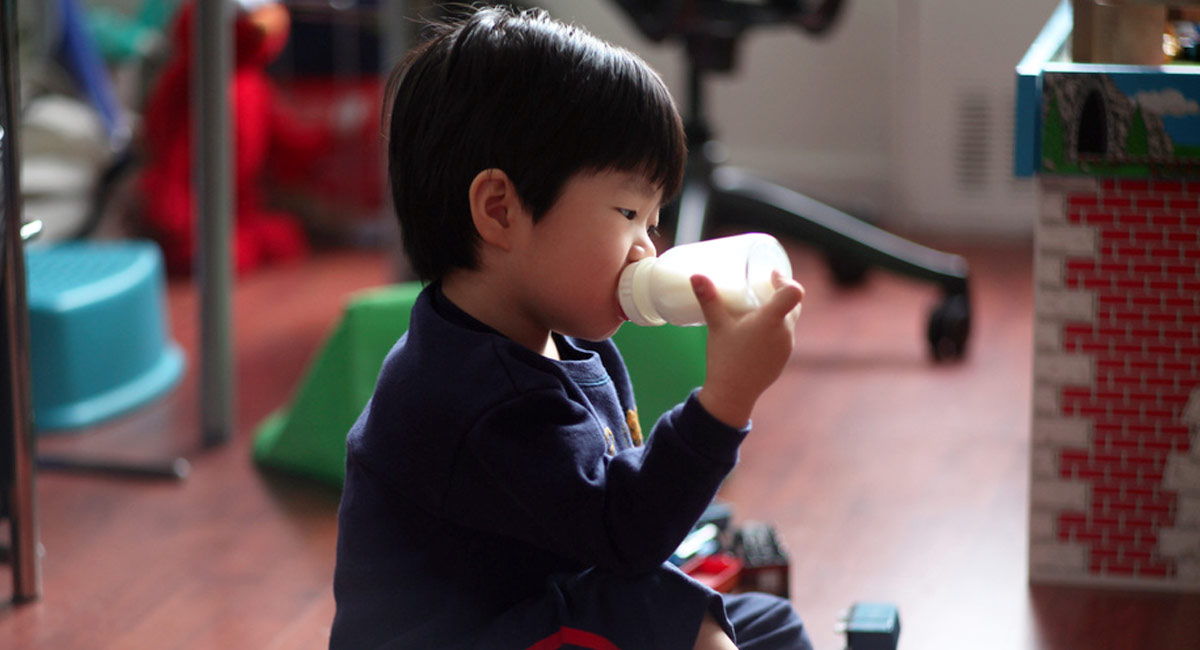 First things first – whether it’s giving your child breastmilk, formula, or a mix of both, what’s most important for your child is that they’re well fed; mums and dads will have their own reasons for the choices that they make, and they’ll definitely be in the best interests of their child.

Formula can be given to your children from the moment they’re born (either exclusively or to supplement your breastmilk), but fresh/UHT (ultra-heat treatment) cow’s and goat’s milk should only be given to them after they’ve turned a year old.

The reason being they won’t be as easily digested, and the high amounts of protein and additional minerals could strain baby’s still developing kidneys.

Let’s take a look at the three different types of milk that we can use to supplement our breastfeeding.

Even though we believe in the power of breastmilk, we also understand that sometimes our bodies aren’t able to keep up with the needs of our little ones – keeping them well-fed and healthy is more important than keeping to a strict ‘breastmilk only’ diet.

Try to establish your breastmilk supply as best as you can before starting to supplement baby with formula.

Doing an exclusive formula feed is still a healthy way to feed baby, as formula has all the nutrients that baby needs and is specifically made for them to consume.

Women who choose to formula feed could be doing so due to these reasons:

An article published by The Straits Times in March 24, 2017 stated that the average price of milk formula is around $56 (for a 900g tin), and babies could go through 3-4 tins of them per month.

How much will you spend on cow's milk formula?

The average cost of 3-4 tins in Singapore is around $196/month, which amounts to around $2,352/year. Now that’s definitely not a small amount, especially if you factor in other costs such as diapers and wet wipes.

Continue reading on page 2 for the benefits of goat's milk...

After baby is a year old, you can start introducing them to goat’s milk. Feeding goat’s milk to toddlers is on the rise in Singapore recently, while other countries have already experienced its benefits for quite some time!

The benefits that goat’s milk has over cow’s milk are rather straightforward:

How much will you spend on goat's milk?

Continue reading on page 3 for the benefits of cow's milk...

The ever-present cow’s milk is something of a staple that kids drink when they’re growing up, and should only be given to our children when they’re more than a year old. Cow’s milk may be less nutritious than goat’s milk on the whole, but it does have its benefits:

How much will you spend on cow's milk?

One obvious benefit that cow’s milk has over formula and goat’s milk is that it’s a LOT cheaper – 1 litre of fresh and UHT milk is around $2.50 to $5.

So… Which Would You Choose?

Out of the three choices, only formula should be given to our children before the age of one. Formula is your go-to option if you wish to supplement your breastmilk or do exclusive formula feeds. However, once they’ve hit the one year milestone, then your options open up greatly as you can start to round out their nutritional needs through solid foods too.

As long as our kids eat a normal, balanced diet, they’ll get all the nutrients that they need. A 2017 Channel News Asia article titled “Children over one do not need formula milk, experts say” states that “formula milk offers no nutritional benefit over a balanced diet”.

They also state that “an infant who weans well and is having excessive formula milk intake can become obese. This carries a negative impact on long-term health with the child having a higher risk of developing metabolic conditions such as adult obesity, diabetes and heart disease”.

For parents who are a bit more kiasu and money conscious (who isn’t, in Singapore?!) they can see if their kids are open to drinking goat’s milk. Otherwise, sticking to cow’s milk is a good choice – just ensure that your kids are eating enough fruits, veggies, eggs, and meat.